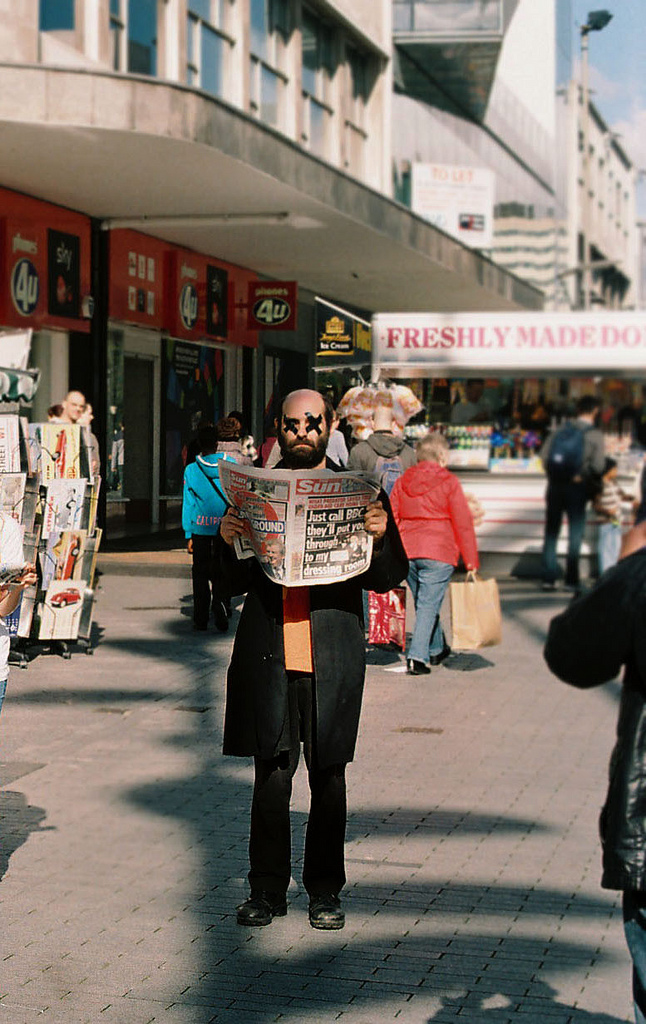 Here’s Tim taking part in the no more page three action a few weeks back. The remarkable photo is by Molly Rhoda. He does appear to be floating half a foot in the air, doesn’t he?

Having stood up to shout “no more page three” in Birmingham city centre a number of times now I’m beginning to smell change in the air. The first time there was nothing much but abuse. The second time some people walked past and quietly said, “good on you guys…” Last friday, though, there was loud vocal agreement from all sorts of people. Still plenty of abuse too (with all that same brilliant phallic wit), but the interesting thing is that more and more people are willing to be seen to be against this… to be against page three.

Public space in this country has become a convictionless arena dominated by the dross of profiteers, and we’ve become the silent herd that passes through it. The only signs of conviction come from the odd preacher of one kind or another (and all are predictably ignored). But last friday a crowd gathered in the street to discuss, and debate what they stood for – right there on New Street. It felt like we, as a people, were beginning to have our own discussion, rather than settling for the illusion of discussion fed down from on high. It felt like we might begin to take responsibility for our own land, rather than leave it to the rule of profiteers and media moguls. I’ll say it again, more and more people are willing to be seen to be against this. It’s no time to be faint hearted.

I think what will follow will be three posts about why page three has to end. In the meantime please read this by the person who started the campaign. And obviously, sign the petition.

There will be more action happening in Birmingham. Notably on Nov 17th. All will be welcome. More on that later…